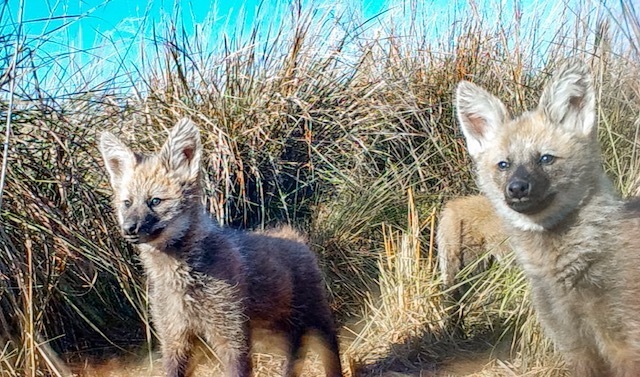 Rewilding Argentina, the strategic partner of Tompkins Conservation, has registered the birth of three pups of this rare species in Iberá Park, a protected wetland of 1.7 million acres in Northeast Argentina where many native species, including jaguars and macaws, are being recovered.

An elusive animal that’s rarely sighted, the maned wolf (Chrysocyon brachyurus) is the largest canid species in South America. But the species’ distribution has been radically reduced as it loses habitat to development and agriculture, is persecuted by poachers, hit by cars, and attacked by domestic dogs. In Argentina, the remaining population of this beautiful creature is catalogued between vulnerable and endangered.

In grasslands and wetlands, the maned wolf helps control populations of small and medium-sized species and acts as a disperser of seeds, but little is known about many aspects of its behavior. According to Kristine Tompkins, president of Tompkins Conservation and UN Patron of Protected Areas, learning more about this elusive species is crucial to complete and healthy ecosystems. She emphasizes, “Wherever species have been lost due to human factors, we need to do all that we can to recover and protect their remaining populations and restore them to the places where they have been lost. It promotes climate stability, prevents biodiversity loss, and keeps pandemics at bay.”

In order to learn more about the maned wolf, researchers at Fundación Rewilding Argentina started a satellite monitoring project of specimens of the species in the Iberá Park, Corrientes, to provide more information about the species’ reproduction, feeding, and use of the territory. VHF radio collars are helping to provide these new insights. In 2020, Rewilding Argentina collared the first specimen in the Rincón del Socorro nucleus of the Iberá Park, followed by three more in 2021.

At the beginning of August, Augusto Distel, naturalist and conservation coordinator for the Rincón del Socorro nucleus, discovered the presence of three cubs in the grasslands. Following the group through VHF signals from their radio collars, Diestel is now observing the family group in person on a daily basis. The data he collects will help shed light on the animals’ behaviors and interactions, their use of the environment, and their overall distribution within the protected area.

Distel has documented maned wolf pups hiding in cavities in the grasslands, safe havens where they are left while their parents go out hunting. Camera traps provide additional information about their around-the-clock behavior without disturbing the group. According to Distel, “This new information can inform conservation measures for the species throughout Argentina.” He adds, “It is opening the doors to plan the maned wolf’s return.”

A driving force to curb the worldwide climate emergency and the biodiversity crisis, Tompkins Conservation has spent nearly three decades working to rewild a healthy planet with big, wild, and connected landscapes where human communities, animals, and plants can thrive.  Collaborating with public and private partners, the organization has driven the creation and expansion of 15 national parks, protecting 14.7 million acres.

All media courtesy of Rewilding Argentina.