Rewilding in the Media #1

Editors’ note:  Fortunately, rewilding projects and ideas are in the news more and more frequently.  Unfortunately, this is largely because the extinction and climate crises have worsened to the point that truly bold and visionary conservation and restoration work are essential to saving life on Earth.  In this new occasional summary, we list some of the notable stories in the media pertaining to protecting and restoring wild Nature.  This first includes some highlights from late Feb-April, 2021. We urge sharing links to the ones you find most inspiring.

2. NYT Op-ed by Crispin Sartwell, “Humans Are Animals. Let’s Get Over It.”
“The more I read it, the more impressed I am with it.  Indeed, I think it one of the best eco-centric rebuttals to human separateness and superiority.  And it is succinct and easy to read.  And funny.  And wickedly cutting.” – Dave Foreman, The Rewilding Institute founder

3. State of the Rockies Project: THE 2021 SURVEY OF THE ATTITUDES OF VOTERS IN EIGHT WESTERN STATES
Not only informative but very comprehensive and filled with bipartisan support for conservation.

4. Frank Buono’s thoughtful “A Refuge for All Americans: National Parks are Still the Best Idea We Ever Had,” from National Parks Traveler, March 1, 2021.

6. “We certainly are everywhere.  While I was reading the 2/12/21 issue of Science, I came across a letter from a bunch of Chinese biologists about reintroduction of Pere David’s deer (until recently extinct in the wild in China with a few survivors in European zoos).  They are nearly 6,000 now roaming free in their old Chinese habitat.  The interesting thing is that they called the recovery ‘re-wilding.’” —Dave Foreman

7. New satellite images show Northern California’s kelp forest almost gone.
The kelp forest that only eight years ago formed a leafy ocean canopy along the Northern California coast has almost completely disappeared, and scientists who study kelp and the species that depend on it are worried about its inability to bounce back. Read more in the San Francisco Chronicle.

8. “It’s Time For A CCC Revival For National Parks And Other Public Lands Share” by John Miles (member of The Rewilding Institute Board)

9. Wisdom, the World’s Oldest Known Wild Bird, Has Another Chick
“At more than 70 years young, Wisdom, the world’s oldest known banded wild bird, is taking on the challenge of motherhood once again…She has logged hundreds of thousands, if not millions of miles flying [carbon-free] around the northern Pacific Ocean and has earned the distinction of living about twice as long as the average Laysan albatross.”

10. From the NYT.  A good article on the importance of including indigenous peoples into the 30×30 discussion:  “There’s a Global Plan to Conserve Nature. Indigenous People Could Lead the Way.”

11. From The Washington Post. “Opinion: Wisconsin’s brutal wolf hunt shows hunters have too much sway over conservation policy” By Jodi Habush Sinykin and Donald Waller. (Don Waller is a member of our Rewilding Leadership Council.)

12. This cool video goes to “show that you can be a wildlife biologist for 50 years and still not know everything.  And I’ve even seen arctic foxes on the tundra.” —Dave Foreman

15. A Biologist, an Outlandish Stork and the Army of Women Trying to Save It

16. Yurok Tribe to lead the reintroduction of condor in northern California

17. Animals Are Rewilding Our Cities. On YouTube, at Least. 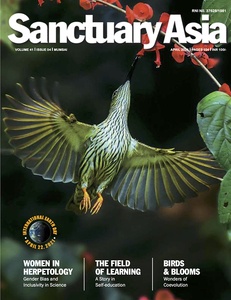 18. Sanctuary Asia, April 2021 Issue
Flip through the digital copy and check out their expansive cover story on women in herpetology, a vibrant photo essay on birds and blooms, how India’s youth are campaigning for a better tomorrow, five must-do nature travel experiences, stunning natural history moments captured in the wild, and much more! (Follow their website www.sanctuarynaturefoundation.org)

20. Boom: Removing 81 Dams Is Transforming This California Watershed
Removing one gigantic dam can have a massive effect on restoring a river ecosystem. But bringing down more than 80 smaller dams? That can also cause a transformation. This spring the Forest Service, aided by U.S. Marine Corps members, will blast apart 13 more dams in the Trabuco ranger district in Southern California’s Cleveland National Forest. It’s the last phase of a groundbreaking project that began more than five years ago to remove a total of 81 dams from four streams in the mountains of Orange County.