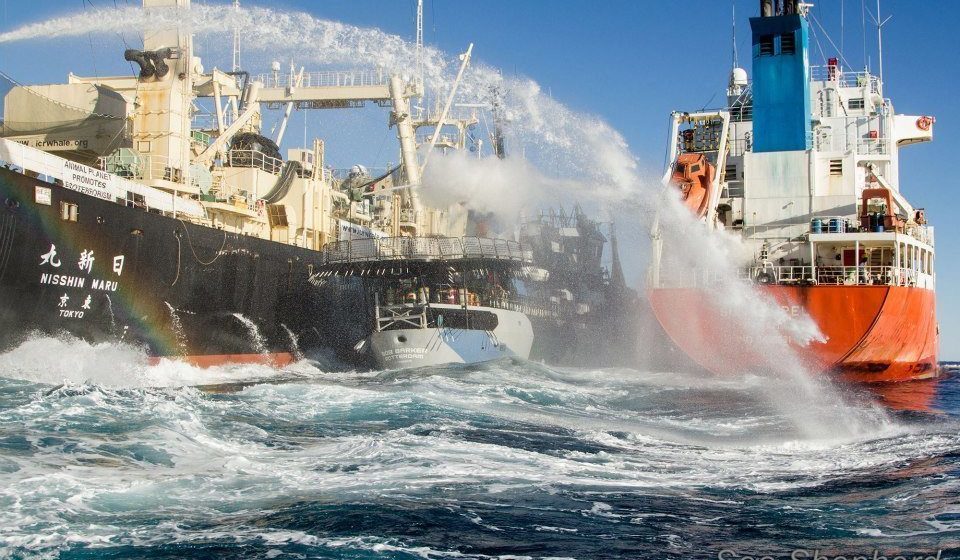 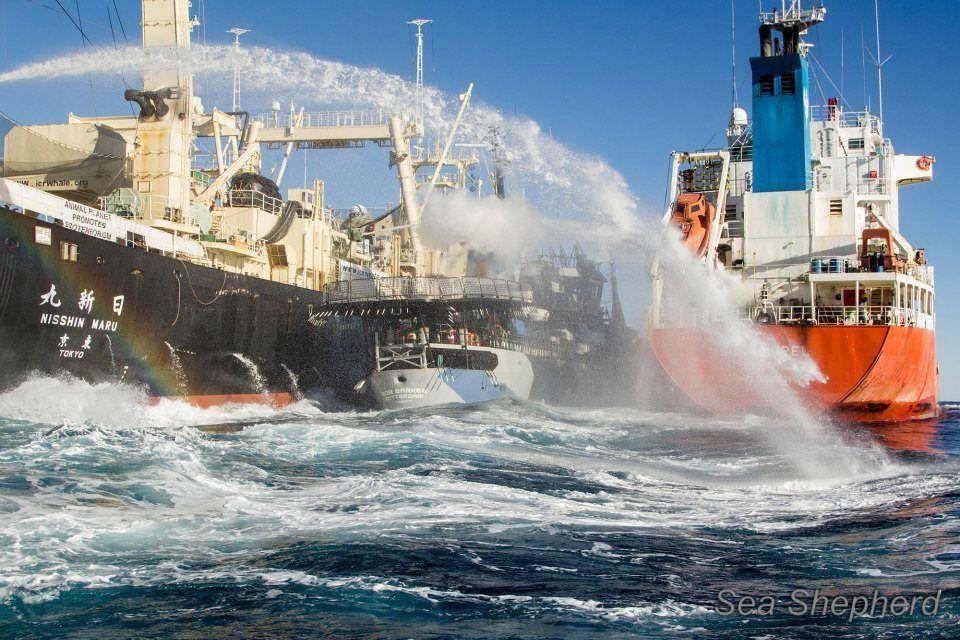 During the previous night, the Korean-owned, Panamanian-flagged fuel tanker Sun Laurel and the Nisshin Maru headed due south through waters peppered with large growlers and icebergs at 12 knots in the darkness without searchlights.  The Sun Laurel is not an ice-classed ship and it is now 420 miles South of Sixty Degrees with their illegal cargo of heavy fuel oil, HFO.

Accompanying the Sun Laurel was the Sam Simon, flanked by the armed security ship, Shonan Maru No. 2 and the Yushin Maru No. 3.  The Nisshin Maru was being tailed by the Steve Irwin and Bob Barker, with the two remaining harpoon ships of the Japanese whale poaching fleet in tow. There were six ships with the whalers and three with Sea Shepherd.

At 2:00 AEDT, the two parties met up and the three agile Yushin Maru harpoon ships began to trail propeller fouling lines while crossing the bows of the Sea Shepherd ships.  The Bob Barker took and held position to the port side of the Sun Laurel to block the refuelling of the Nisshin Maru, and held the position as the Nisshin Maru twice approached and caused collisions between itself, the Bob Barker and the Sun Laurel.

The Nisshin Maru shot its high-powered water cannons down the exhaust vents of the Steve Irwin, Bob Barker, and Sam Simon, attempting to flood their engines.  All engine rooms suffered heavy flooding, but no mechanical failures.

The Nisshin Maru launched “flash bang” concussion grenades towards the Bob Barker, one of which struck and exploded on the Sun Laurel, leaving a black smolder mark.

The Steve Irwin’s water cannons were engaged and the Sea Shepherd crew was instructed not to aim them at any people on the poaching vessels.

In a dramatic turn of events, the six ships are currently being approached by a massive Japanese Naval ship.  The Japanese Maritime Self-Defence Force vessel Shirase (MMSI #: 431999533) is an icebreaker, designated as type ‘Military Ops’.  It carries approximately 250 crew and three helicopters. It is 12,500 tons, 138 metres and can do 15 knots.  Its last known port was Fremantle.

Regarding the Shirase, former Australia Environment Minister, Ian Campbell, says, “This summer this vessel was in Freemantle, West Australia. Now it’s assisting in the Japanese whaling fleet in its illegal operations. It should be banned from all Australian ports from now on.”

Despite numerous requests from Sea Shepherd as well as political forces, Australia has not sent a ship to monitor activities here in the Australian Antarctic Territory, but an armed Japanese war ship is arriving imminently to defend a whaling operation that is in contempt of the Australian Federal Court and a tanker that is illegally in these waters with heavy fuel oil and operating in a dangerous manner.

Director of Sea Shepherd Australia, Jeff Hansen, states, “Back in December of 2007, like the Shirase, the Shonan Maru No. 2 was granted permission to dock in Fremantle by the Australian Government, who stated that it was not part of the whaling fleet. Then in January 2010, the same vessel, the Shonan Maru No. 2, went on to ram and destroy the New Zealand registered vessel the Ady Gil. Australian diplomats were quick to absolve Japanese whalers of blame, telling the U.S. Embassy in Canberra the Japanese would ‘come away clean’ from any investigation. Effectively, we expect that once again, Japan will come away clean from any Australian investigation into these recent, blatant ramming attempts by the massive factory whaling ship, the Nisshin Maru. What effectively is happening is that the Australian Government is giving Japan the green light to do what ever it wants in endangering the lives of Sea Shepherd’s international crew in Australia’s Antarctic Territory.”

Sea Shepherd Australia is a non-profit conservation organisation whose mission is to end the destruction of habitat and slaughter of wildlife in the world’s oceans in order to conserve and protect ecosystems and species. Sea Shepherd Australia uses innovative direct-action tactics to investigate, document and take action when necessary to expose and confront illegal activities on the high seas. By safeguarding the biodiversity of our delicately balanced oceanic ecosystems, Sea Shepherd Australia works to ensure their survival for future generations. Visit www.seashepherd.org.au for more information.

“We do not inherit the Earth from our ancestors; we borrow it from our children, what is the legacy you will leave behind?” — Indian Proverb