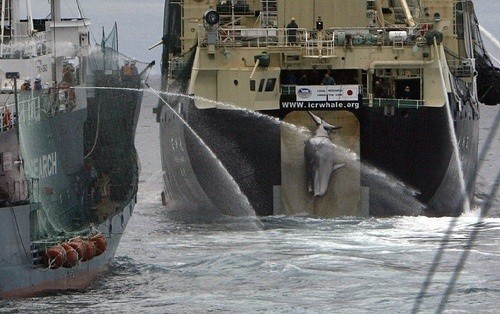 This position places the factory vessel in the Prydz Bay off the Ingrid Christensen Coast of Princess Elizabeth Land, in the Southern Ocean Whale Sanctuary.

Captain of the Bob Barker, Swede Peter Hammarstedt, reported that the Yushin Maru No. 2 tried to obstruct the Bob Barker from shutting down the Nisshin Maru and Japan’s illegal whaling operations by dangerously criss-crossing the bow of the Bob Barker, coming as close as 600 yards and threatening to deploy prop fouling devices.

Captain Hammarstedt has made the following statement: “We found the Nisshin Maru drifting off-guard in the early hours of the morning.  We suspect that at first light, they intended to begin processing whales from the nearby Yushin Maru 2.  But along with the rising sun, the crew of the Cetacean Death Star saw the Bob Barker on the horizon, coming to shut down their poaching operations today, and hereafter.

My crew and I are elated today because we are now certain beyond doubt not a single whale will ride up that morbid slipway I see before me on this beautiful morning. All of our crew, on-shore volunteers, staff and supporters should feel very proud knowing that because of their passion and support these majestic and beautiful whales are safe. We will stay on that slipway and make every effort to ensure no whales are killed on Sea Shepherd watch. The sanctity of the Southern Ocean Whale Sanctuary has been restored.”

Sea Shepherd Australia Director, Jeff Hansen, said, “The world’s last remaining whaling factory ship, the most evil vessel ever built, was shut down today by Sea Shepherd. This vessel and its illegal cohorts are in contempt of the Australian Federal Court and have no place being in an established whale sanctuary off Australia’s Antarctic coast. This is a final nail in the coffin of Japan’s illegal whaling that has no place in the 21st century. It’s time the Japanese whale poachers got the message; you’re not welcome in Australian waters, go back to Japan and take your illegal, cruel and barbaric whale poaching operations with you.”

The Bob Barker is now half a mile behind the Nisshin Maru, 17 miles off the coast of the Australian Antarctic Territory.

The SSS Steve Irwin is heading to that position at full speed with the Yushin Maru No. 3 following. The Steve Irwin is 250 nautical miles from the Nisshin Maru.

The Yushin Maru No. 1 was last reported hundreds of nautical miles to the East of the Cooperation Sea and low on fuel.

Operation Zero Tolerance Co-Campaign Leader Bob Brown says,” One cannot even begin to imagine the massive pain and suffering that these whales endure when they are chased, hunted and have an explosive harpoon shatter through their body. Not to mention the helplessness their families would feel watching and hearing one of their own in such pain. To know that the whales in the Southern Ocean Whale Sanctuary are safe fills me with absolute joy. It’s a good day for the whales, it’s a good day for Sea Shepherd!”

The Sea Shepherd ships have been in full pursuit of the Nisshin Maru since January 29th. The pursuit has covered 2,550 nautical miles from the middle of the Ross Sea to the Cooperation Sea.

The Nisshin Maru from the bow of the SSS Bob Barker

– BLOCKS THE TRANSFER OF A DEAD WHALE TO THE NISSHIN MARU

Feb. 15, 2013 – MELBOURNE, Australia  — After an 18-day 2,500 nautical mile chase the Japanese whale poaching fleet and Sea Shepherd Australia’s fleet are now fully engaged in a confrontation as the Japanese whalers begin their attempts to kill whales. The Sea Shepherd crew is working hard to block their illegal activities and uphold the 1986 global moratorium on commercial whaling.

At 1820 AEDT, the harpoon ship attempted to transfer the dead whale to the butchering ship, the Nisshin Maru. The SSS Bob Barker radioed to inform the illegal whaling ships that they would not be allowed to transfer the poached whale and moved into position to block the transfer.

The Yushin Maru No. 2 is presently unable to complete the transfer.

If the transfer is completed the Yushin Maru No. 2 will kill another whale, so in order to uphold the sanctity and integrity of the Southern Ocean Whale Sanctuary the Bob Barker had to implement the only effective non-violent tactic available to oppose their illegal operations.

The SSS Steve Irwin continues to head towards the Nisshin Maru, Yushin Maru No. 2 and the Bob Barker.