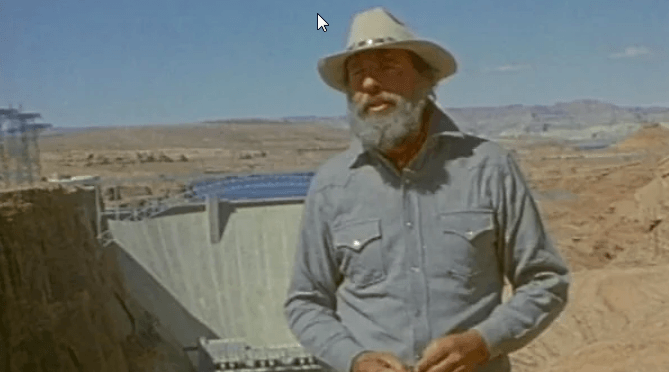 Wrenched from the Land: Activists Inspired by Edward Abbey

Thirty-one years have passed since Ed Abbey’s fierce, funny, and often ribald voice stopped telling stories about the American Southwest, stories that skewered and afflicted the powerful and comfortable and inspired generations of activists to rise up in defense of Mother Earth. As Bill McKibben writes in the forward to Wrenched from the Land, no author either he or I “can think of produced two books as disparately great as Desert Solitaire and The Monkey Wrench Gang.” Abbey was a unique character, a philosopher, an anarchist, a great storyteller, critic, and writer. He left a legacy, and in this book photographer and filmmaker ML Lincoln presents sixteen interviews that testify to that legacy.

The “wrenched” in the title is double entendre, drawing on Abbey’s symbolic monkeywrench, and the wrenching destruction of beauty and wildness in Glen Canyon, on Black Mesa, and elsewhere in his beloved Southwest. The interviewees all shared Ed’s feeling of being “wrenched from the land,” and some of them, like Dave Foreman, Jack Loeffler, and John De Puy, were inspired to throw monkeywrenches at the despoilers be they developers or government bureaucrats – not literally, of course, but in diverse and inspired ways. Tim DeCristopher, the youngest interviewed and leader of a new generation of activists, says that Abbey “felt like people were at war with him and at war against his home and that they were making war against the West. It’s still happening.” What to do? “I think a lot of answers can be found by reading Abbey,” he says. “Not that we should be following exactly what he did, but that we should feel as passionately as he did, that we should take it as personally as he did, and that we should get as angry as he did.”

Each interview segment begins with a brief biography of the activist being interviewed, followed by questions from Lincoln and responses from Charles “Chuck” Bowden, Katie Lee, Doug Peacock, Kieran Suckling , and many other luminaries of activism for Western lands over the past half-century who were inspired by Ed Abbey. Dave Foreman describes the “cracking” of Glen Canyon Dam as only he can. Paul Watson explains why he called the Sierra Club the “Avon Ladies”, and the three ecological principles that guide his work. Katie Lee describes Glen Canyon, her love for it, and her outrage at its inundation by “Lake Foul.” She says “I really don’t think that I would have gotten around to writing All My Rivers Are Gone [renamed Glen Canyon Betrayed] about my trips through Glen Canyon if he hadn’t come through and read the novel and said, ’Get on with it, Lee.’ Thanks, Ed.” 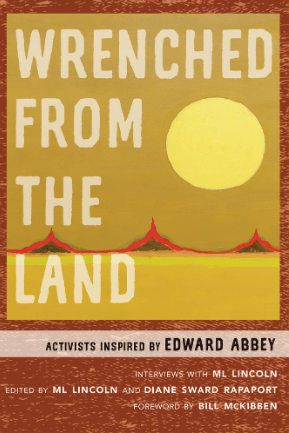 Doug Peacock says monkeywrenching today is “a metaphor for standing up for what’s right at the time,” and standing up for the earth is “going to be a hell of a fight.” Jack Loeffler, consummate storyteller that he is, explains what Abbey meant when he proclaimed himself “a barefoot eco-anarchist,” recounts the failed campaign against Peabody Coal at Black Mesa, and the successful fight against the Kaiparowits power plant, both inspired by Abbey.

Kieran Suckling, co-founder and executive director of the Center for Biological Diversity describes his initiation into activism and Ed’s influence on him. Just as Dave Foreman and Ed were attacked for their activism, so is the very aggressive Center, and Suckling says “If the industrial death machine is not pissed off at you, you probably have not been effective. The more pissed off they are, the better we know we are doing our job.” Ed would surely agree.

Wrenched from the Land offers serious thought and history but also humor. Abbey was a character with a sharp and sometimes biting sense of humor, and so were others in his orbit, including Foreman, Ken Sleight, John De Puy, and Ken Sanders. Their interviews are entertaining. Sometimes Abbey was the butt of the jokes. Here’s a famous anecdote as told by John De Puy:

Ed and I found this D3-Cat during the construction of that stinking highway down to the Colorado River. The stupid idiots had left the keys in the ignition. So we turned the damn thing on and sent it off a five-hundred foot cliff – made a nice shot when it blew up in flames.

Anyway, I had some land near Monticello in southeast Utah, near Devil’s Canyon, where I camped during the summer. One person who had some land right next to mine was Bevin Wright, the son of Frank Wright, the famous river runner. Bevin was the chief of police in Blanding. He’d often stop by after he got through work, in full uniform, pistol on the side.

One night, while Ed and I were standing around the fire cooking, up comes Bevin in full uniform. He pulls up in his car, walks up to the tree we’re camping under, and says “What are you boys eating?” I said, “T-bone steaks. Want to join in?” Ed and I were drinking beer, boiler-makers actually. Bevin says sure and sits on a log.

I saw Bevin wink at me so I knew it was a joke. The reason it was a joke was that the Mormon ranchers who lived around there hated that highway. They didn’t want the damn thing built and were happy when the D3 went over the side. But Ed didn’t know this! Here’s this cop in full uniform, badge, .44 magnum on his hip, looking him in the eye and saying, “You boys wouldn’t know anything about that D3-Cat?”

Bevin had the courtesy to explain to Ed afterward that it was no problem.

Wrenched from the Land is also an enjoyable way to learn history of conservation battles in the Southwest since the 1970s, some of which are still being engaged. It offers insight into key players in those struggles and their victories and defeats. Activism, Earth First!, and monkeywrenching are examined quite extensively by those who participated. Foreman explains how Earth First! came to be, how it evolved, and why he eventually moved on. It’s first big event was the “cracking” of Glen Canyon Dam, and in the early days the aim was to do guerilla theater, sound radical enough to make mainstream environmental groups seem moderate, and make the point, as the Buckaroos did, that these wilderness activists “were bigger rednecks than the antiwilderness rednecks.”

At the other end of the activist chronology, Tim DeChristopher, who bid up oil leases near Canyonlands and Arches National Parks at a BLM auction and went to prison for this activism, says of young activists like himself.

Whatever action we take it’s got to be effective. We have to believe we are taking actions strong enough to make changes. We want to win. I think the only way that young people are going to get involved with the environmental movement is to start asking a lot more of them. Don’t ask them to do something easy. Ask them to do something that’s going to make a difference.

Terry Tempest Williams says of Tim DeChristopher, “What Tim has represented and asked us to consider is: What are we willing to do for a livable future? How am I personally accountable for that future? In many ways, Tim is the next generation of direct action. For that, I am grateful. He is a leader of great courage and great heart.”

One powerful impression that comes through in reading Wrenched from the Land is that the conservation activist community in the Southwest has been and is still a strong community, and this is true in no small part because of Edward Abbey. Terry Tempest Williams says, “The Monkey Wrench Gang to me is a novel about community. That’s the enduring legacy of Edward Abbey. He created a different kind of community – one that honored a sovereignty of spirit. He took the word radical and brought it into the notion of conservative, to conserve, to protect, to love.” Reading this book makes me, a latecomer to the Southwest, proud to be a small part today of this community waging the hard fight against land despoilers in the Trump administration.

If Abbey were with us today, what do you think he might have to say about Trump and his minions and their many attacks on the West? Would it be, as Doug Peacock says, “To survive is natural. Now is our time to concentrate our strengths and organically connect with that which gave rise to our species, which is the earth itself. It’s going to be a hell of a fight.” Or might it be more in the style of Chuck Bowden, “I’m patient. I believe in the future. Look, I get tired of people afraid of the future. It’s the only goddam place we’re going. That’s all that’s left to you and the rest of your life. And if you’re afraid of it, go to hell. Okay.” I hear Abbey in both of them. 1
________________________________