Mixed Victory for Wolves: Judge Issues Immediate Halt to Wolf Slaughter Except in the Northern Rockies 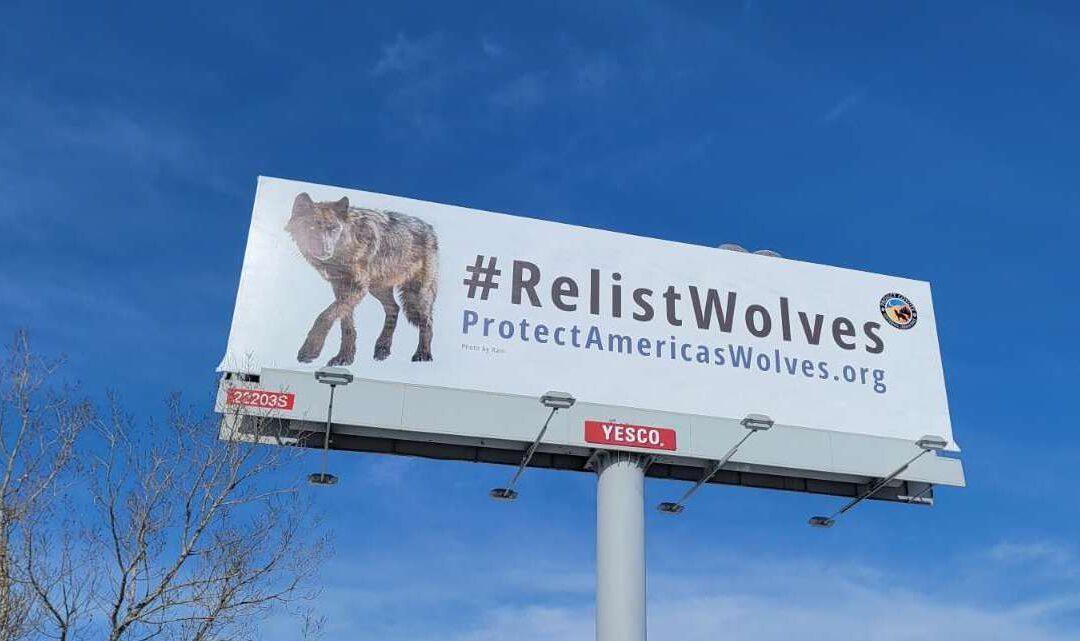 Project Coyote: We were about to press send on our original release showcasing our new billboard campaign to relist wolves in the Northern Rockies when the news of the below court decision broke. This post combines our two media statements.

On February 10, a federal district judge in California restored federal protections for wolves at the request of the 16 wildlife conservation organizations and additional co-plaintiffs across three related lawsuits, immediately restoring Endangered Species Act protections to all wolves in the U.S. except those in the Northern Rockies (Idaho, Montana, and Wyoming).

In his decision, federal district Judge Jeffrey White wrote that the U.S. Fish and Wildlife Service (USFWS), “similar to its previous rulemaking, did not adequately consider threats to wolves outside of these core populations. Instead, the Service avoids analyzing these wolves by concluding, with little explanation or analysis, that wolves outside of the core populations are not necessary to the recovery of the species.”

However, this ruling fails to protect Northern Rockies wolves from virtually unregulated hunting seasons that are ongoing, imposed by state legislatures last year to intentionally wipe out wolf populations in these states.

“Like so many previous legal decisions, the court was not fooled by USFWS’ inadequate claims that wolves are recovered or adequately protected across their range to ensure persistence,” said Michelle Lute, PhD in wolf conservation and national carnivore conservation manager at Project Coyote.

“The American public is clear: they demand more than just persistence for wolves. All wolves deserve full, enduring protections and a national recovery plan that will allow them to fulfill their ecological functions and live self-determined lives without persecution,” Lute added. “The billboards Project Coyote launched earlier this week are even more vital as we work to shift the narrative from killing to coexistence, raise awareness of just how these states are decimating wolf recovery, and put a halt to the slaughter of wolves in the Northern Rockies.”

“Though this is a relief for some wolves, this ruling is only a temporary reprieve and ignores the plight of the wolves who are the most watched and most celebrated the world over,” said Camilla Fox, founder and executive director of Project Coyote. “From our recent legal victory blocking a second wolf hunt in Wisconsin to this court order and the spotlight these billboards bring, we are daylighting bad deeds of politicians and hunting groups — as well as the Biden Administration’s failure to do what’s right for wolves — and putting on notice those who play political games with endangered species.”

Project Coyote’s billboards, located along the Pocatello-Idaho Falls corridor in Idaho and near Kalispell, Mont., are part of a coordinated campaign to Protect America’s Wolves and command attention on the unchecked state-led war on wolves across the Northern Rockies.

The USFWS is currently considering petitions calling for emergency relisting of wolves that could include Northern Rockies wolves and accepting comments from the public. Tens of thousands of comments in support of restoring protections for wolves have flooded in from across the nation, yet this court decision is the first action taken to restore protections for wolves.

More than 11,000 people have signed on to Project Coyote’s petition calling on Secretary Deb Haaland to relist wolves and establish a national wolf recovery plan.

These billboards, located along the Pocatello-Idaho Falls corridor in Idaho and near Kalispell, Mont., are part of Project Coyote’s coordinated campaign to Protect America’s Wolves and command attention on the renewed state-led war on wolves across the Northern Rockies.

The U.S. Fish and Wildlife Service is currently considering emergency relisting of wolves and accepting comments from the public. With wolves’ breeding season quickly approaching and increasing their vulnerability to states’ liberalized killing, time is running out for a treasured species so vital to American ecosystems, First Nations, and diverse American values.

“Wolves must be relisted because states don’t manage wolves, they execute them every chance they get,” said Michelle Lute, PhD in wolf conservation and national carnivore conservation manager at Project Coyote. “Without ESA protections, wolves are subject to the literal slings and arrows, as well as legions of bullets, traps, snares, helicopters, poisons, hounds and snowmobiles, all due to their outrageously poor fortune to have to share space with humans who are too often driven by hatred.”

The war on wolves is not only attacking individual wolves, whole packs, and the nationwide population, but also the cultural and spiritual connections to wolves held by many Indigenous tribes across the country. Rain, executive director of the Global Indigenous Council and award-winning director of the documentary about tribal-wolf relationships, Family, took the photograph featured on the billboards.

“The most endangered species in the Rocky Mountain West is a politician who doesn’t want to see wilderness become cattle pasture and who doesn’t call ‘killing’ wildlife management,” said Rain. “The Endangered Species Act is life support for sacred beings like grizzlies, wolves, and wolverines. It is imperative that it is applied to those on the precipice of life and death like the wolf.” 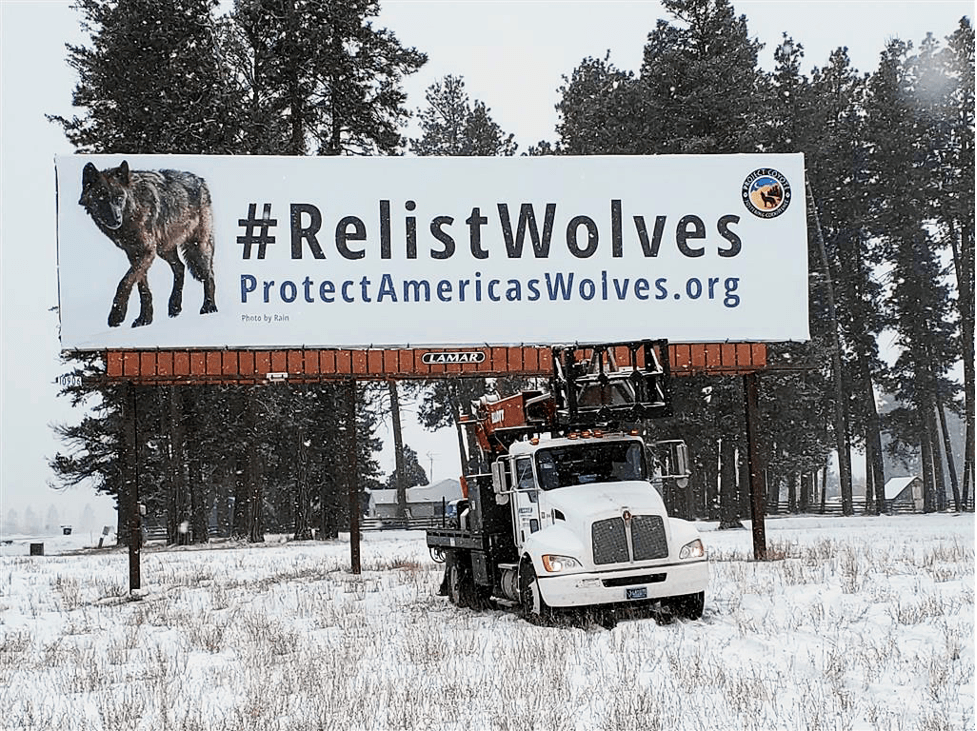 The billboard outside Kalispell, on the route to Glacier National Park.

Broad coalitions of tribal and environmental groups have filed lawsuits, circulated petitions, and sent letters calling on Interior Secretary Deb Haaland to enact emergency relisting of gray wolves to the ESA. Yet, these efforts have gone unheard and without response.

Secretary Haaland failed to show up for a scheduled meeting where tribal leaders planned to present the Global Indigenous Council’s Wolf Treaty. U.S. Representative Peter DeFazio (D-Ore.) directly expressed his concerns regarding the delisting, describing it as a “Trump-era policy that threatens the existence of a species,” to Haaland. Haaland has thus far ignored those concerns, which are shared by scientists, businesses, and diverse groups of Americans as well as increasingly alarmed global citizens — all signing petitions and letters organized in response to this unprecedented slaughter.

“Wolves are thinking, feeling, social beings who value their lives and relatives, and make incredible contributions to human wellbeing through ecosystem benefits,” said Francisco Santiago-Ávila, PhD in wolf-human coexistence and big river connectivity science & conservation manager for Project Coyote. “That should be enough to promote their protection, care and respect, instead of their slaughter and exploitation. The ethical and scientific evidence supports full protections as the best way to mitigate harms to our entire community, including producers and domestic animals.”

The latest released numbers indicate that at least 207 wolves have been slaughtered in Montana’s current hunting and trapping season. At least 20 wolves from Yellowstone National Park have been executed as soon as they wandered (often baited) outside park boundaries. Many of these wolves have been studied by scientists for years and, with their needless and untimely deaths, invaluable knowledge has been tragically lost.

Idaho killed 496 wolves legally in 2021— nearly one-third of the state’s wolves. Idaho legislation passed last year stated that the state’s goal is to reduce their wolf population by 90% using bounties and the most egregious and inhumane methods in the lethal arsenal — running them down with vehicles and hounds, baiting and snaring — and allowing trapping on private property year-round. Additionally, the Idaho Wolf Control Board will have over $1 million in state funds to kill wolves at its disposal in 2022.

The billboards, up through April, will direct those interested to visit ProtectAmericasWolves.org to learn more about actions individuals can take to urge Secretary Haaland and the Biden Administration to fulfill their obligation to sovereign tribal nations, the American public and global stakeholders to protect wolves. If federal leadership does not act immediately, America will lose untold numbers of wolves, setting wolf recovery back by decades, negatively affecting species recovery and ecosystem health for generations.

Background:
In response to federal delisting of gray wolves across their range and the renewed war on wolves by states, Project Coyote launched the Protect America’s Wolves (PAW) campaign in 2021 to raise awareness about the plight of wolves. To bolster this effort and inspire action, Project Coyote is releasing two new videos produced by National Geographic filmmakers Filipe DeAndrade and Brian Moghari about the brutal slaughter of wolves in Idaho and Montana.

“Our aim in producing these videos is to raise public awareness about the plight of wolves in the United States since delisting and to propel action to protect them,” said Filipe DeAndrade, ambassador for Project Coyote and co-founder of film production company Comfort Theory.