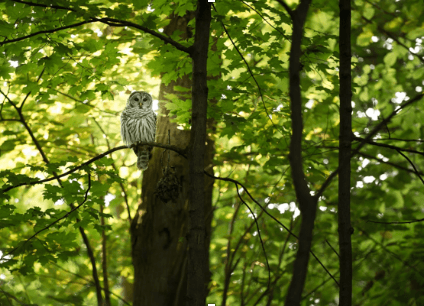 To Solve the Climate Crisis, We Must Stand for Forests and Re-Wild America

April 29, 2017 was a super-hot day in Washington, DC. It was the middle of spring, but the temperatures reached well into the 90s. It felt like mid-August. My colleague and I kept finding ourselves gravitating to the shade of trees for relief from the heat of the sun as we walked through the city. We couldn’t help but wonder why more people weren’t hovering underneath the city’s natural air conditioners.

We had traveled to DC for the People’s Climate March where we joined an estimated half a million people from all over the country marching in the streets demanding action on climate change. Everywhere we turned were banners and signs demanding an end to fossil fuel use. “Stop Keystone XL” “Stop the Dakota Pipeline” “Coal Kills”. We seemed to be the only ones in an ocean of US climate activists calling for forest protection.

Suddenly, I caught a glimpse of a guy holding up a placard with a hand-drawn clock on it surrounded by drawings of trees. The hands of the clock were at 4:10 and the sign read: 410 ppm — Time to Re-Wild America. Before I could chase him down and tell him that he was not alone and that I knew exactly what his sign meant, he was lost in the crowd.

Just before the climate march in the spring of 2017, the Mauna Loa Observatory released its report documenting that the concentrations of carbon dioxide had reached a human-era high of 410 parts per million (ppm). Also around this time, I had just released a report with world renowned climate scientist Dr. Bill Moomaw entitled: The Great American Stand: US Forests and the Climate Emergency underscoring exactly why “rewilding” US forests is critical to avoiding climate chaos. 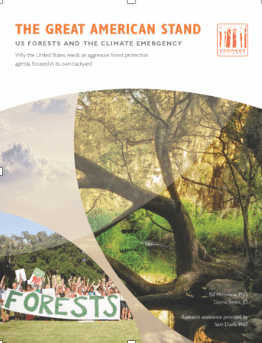 After the climate march, I was inspired to write my first blog in Medium, entitled: What 410 ppm Means for the Climate Movement in One Word – “forests.” Thus, spring 2017 marked the beginning of a mission I’m on to elevate forest protection in the US as a national climate priority. One year later, an unprecedented alliance of forest, climate and justice organizations are coming together behind a call to embrace US forest protection as a climate imperative. Also, one year later, the measured level of carbon dioxide in the atmosphere reached another all-time high of 411 parts per million (ppm) Most scientists agree that the safe level for humans is 350 ppm.

Overwhelmingly, scientists are finding it difficult to achieve the Paris Agreement goal of limiting temperature increases to 1.5 degree Celsius by the end of the century without modeling scenarios that include both a rapid transition to 100% clean energy and the extraction of carbon from the atmosphere. The best technology available for removing carbon from the atmosphere is actually not technology at all – it’s natural, biodiverse forests. 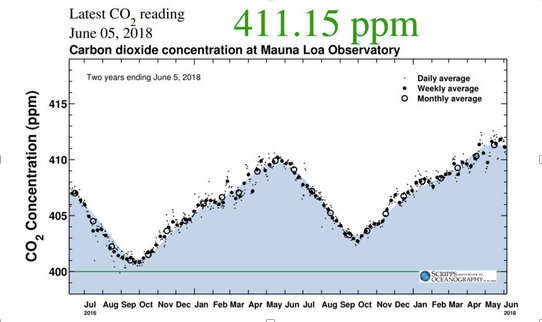 We must turn up the speed on the Earth’s natural air conditioning and carbon sucking system. To do this we must not only protect the roughly 28% of what remains of the Earth’s old, intact forests but also let young, degraded forests grow old and wild again. Countless studies document just how much more efficient trees are at sucking carbon out of the atmosphere after they hit their 100th birthday. At that point, a tree’s carbon sucking power moves into high speed mode and it begins to store exponentially more carbon in its leaves, trunk and roots as it grows. 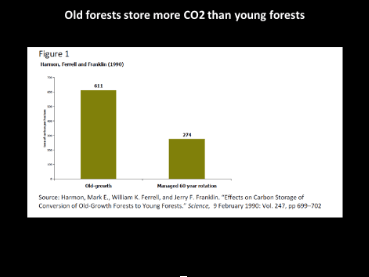 Several hundred years ago, the US – like most of the rest of the terrestrial world –was carpeted by old, intact, wild forests. These highly complex ecosystems, which evolved over 300 million years, created an interconnected web of life that, together, played a major role in creating the climatic and other conditions that allowed humans to thrive. They maintained temperature equilibrium, ensured plentiful supplies of fresh water, purified the air, created buffers against flooding, and generated an abundance of food and medicine. They also served to regulate the amount of carbon dioxide in the atmosphere. 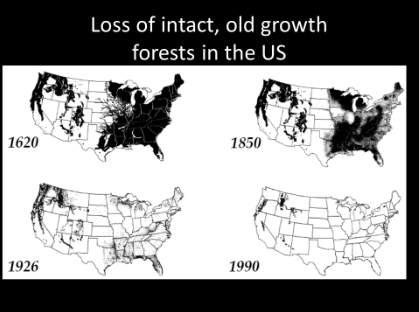 Most of America’s original forests were leveled in the relatively short period of time between the industrial revolution and the 1990s. Today, it is estimated that less than 5% of these original, intact old forests remain. And while many might point to the fact that the US has an abundance of forests, the forests of today are vastly different from the original forests. It is estimated that 60% of the carbon released when these original forests were logged has yet to be recovered by today’s forests. That means our forests are operating at a serious carbon deficit.

This is because while trees can live to be hundreds, some thousands, of years old, less than 15% of our forests are older than 100 years. America’s once old forests have not been “renewed”; they have largely been replaced by a patchwork of industrial pine plantations, clearcuts and young natural stands. This is because the US is the world’s largest consumer and producer of wood products — with a rate and scale of logging in the US Southeast alone that is four times that of South American rainforest. The over-production and consumption of wood products is significantly inhibiting our forests’ ability to grow old, and therefore to suck carbon out of the atmosphere and store it back on the land, where it belongs.

To make matters worse, industrial logging also releases vast amounts of carbon that otherwise would be stored in forests. A peer-reviewed study published in 2016 found that industrial logging in the US is a significant contributor of carbon emissions, is by far the single largest driver of carbon loss from forests (not wildfire or development), and is degrading the US carbon sink by at least 35%. 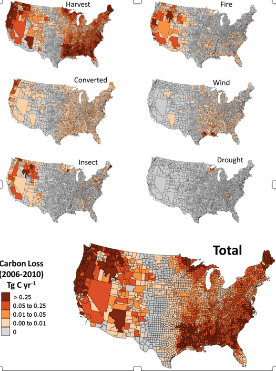 Just this year a study published by researchers at Oregon State University found that logging was the number one source of that state’s carbon emissions, exceeding emissions from fossil fuels.

Another study, published in Nature in December of 2017, warned that to solve the climate crisis we must acknowledge the climate impacts associated with logging or “managed” forests. They compared current amounts of carbon stored in forests around the world with how much more carbon forests could store if forests were protected from deforestation and logging. The results show the extent to which intensively logged areas like the Southeast US, if protected, would move from their current status of “low carbon storage” to be among the highest forest carbon stores on Earth – meaning large amounts of carbon currently in the atmosphere could be removed and stored back in the forest where it belongs.

Letting forests grow old and wild again would also have the added benefits of optimizing forests’ ability to provide natural flood control, stabilize fresh water supplies, and cool the air at a time when extreme flooding, droughts, and heat waves are only getting worse. Equally important, rewilding our forests would help restore critical habitat for countless species hanging on the brink; for we are currently experiencing a rate of global species extinction unmatched since the time of the dinosaurs. Biodiversity underpins all of the ecological functions of a forest and makes all life possible on Earth.

Too often it is asserted that we “need” wood products. If we are honest with ourselves, we realize most of the wood products we consume are convenient or desired; they are not only unnecessary, but, in fact, quite wasteful. And given what that is costing us, we simply cannot afford to waste our forests any longer. We need to drastically reduce the production, consumption and landfilling of wood products, while prioritizing living forests’ life-supporting services.

If we do not stand for forests, we will continue on a path of forest destruction that will make it impossible to stop climate catastrophe. At this very important moment in time, utility companies here and in Europe are burning American forests in power stations as a “renewable” alternative to coal when they could be investing more in solar and wind and efficiency. Plastic grocery bags are being banned while paper bags are provided, instead of requiring shoppers to bring their own reusable bags. Restaurants trying to save the oceans by eliminating plastic straws are promoting “biodegradable” paper straws as a solution. The clothing industry is now touting wood fiber as a sustainable alternative to polyester. The list goes on and on. 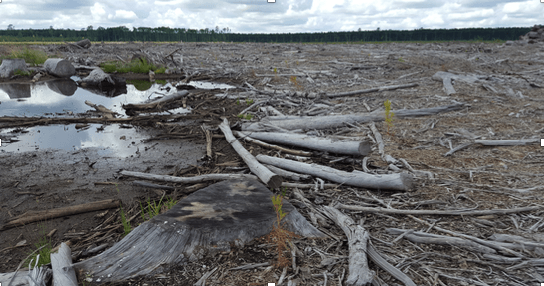 We can’t pretend anymore that the biggest forest problems are in the tropics or that America’s forests are being “sustainably” managed within the 21st century context of climate change. While we have managed to “sustain” an endless flow of wood products to commercial markets, today’s ecological challenges demand rapid adaptation away from consumerism. We must evolve past the archaic models of the industrial revolution to a new era that combines clean technology with ecological restoration. Just as we need to transform our energy economy away from extracting fossil fuels, we must also transform the forest extraction economy. We must not fool ourselves into thinking that technology alone will be enough to restore equilibrium to the atmosphere and stabilize global temperatures. We need nature. It’s now 411 ppm – the clock is ticking.

That’s why Dogwood Alliance – working in the world’s largest wood producing region – has brought faith, climate and justice organizations from across the US together to align around a platform calling for forest protection to become a national climate priority. Your organization can join the Stand4Forests movement to re-wild America by simply clicking here. Together, we can put the protection of forests here at home on the climate solutions roadmap where they belong.

Dogwood Alliance has generously granted permission to Rewilding Earth to use all images in this article. ~ editors