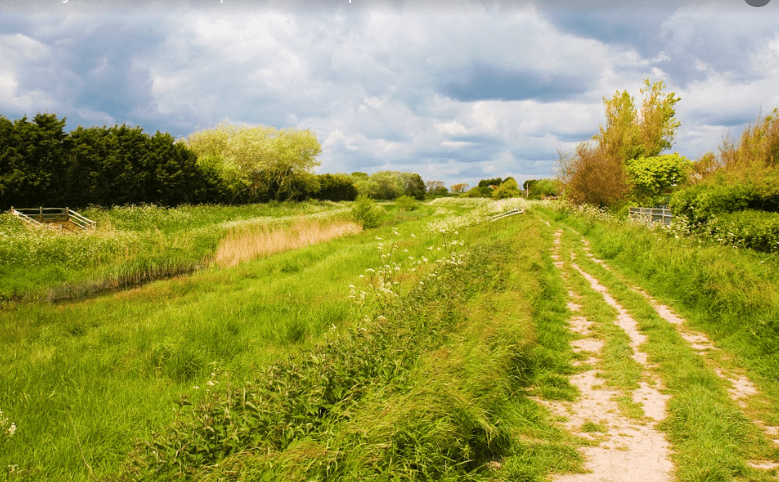 Wilding: Returning Nature to Our Farm

As I began working on this review of Isabella Tree’s Wilding, I happened upon an article posted today in the Daily Mail titled “UK should build a ‘forest of Britain’ from Land’s End to John O’Groats.” The article reports on a proposal in the Policy Exchange’s “’Bigger, Better Forest’s report which considers UK land use post-Brexit, outside of the EU Common Agriculture Policy.” The idea is to connect as many conservation sites in Britain as possible on a scale that would involve “over around 2,400 square miles (around 6200 sq km) and contain over 300 million trees.” The story also notes that “The report proposes that farmers should be supported in the pursuit of more diverse land-management approaches to incorporate the farming of woodlands and agroforestry, which would see trees integrated with grazing and arable crops.”

Before reading Wilding, I would have thought “That sounds great,” and moved on. But this idea, especially that last part about pursuing more diverse land-management approaches is exactly what Isabella Tree advocates in her book. Perhaps the example of applying diverse approaches on the Knepp Estate in Sussex, owned by Tree and her husband, influenced the think tank to come up with this large-scale proposal, which they think might be a fine way to mark Queen Elizabeth’s upcoming Platinum Jubilee anniversary, celebrating seventy years on the throne. Tree is not focused especially on planting trees but on managing the land in new ways after more than a millennium of doing it the conventional British way on the Knepp Estate.

So far in the post-Brexit debate, farming and conservation have been pitted against each other, as if the two must battle it out for resources. But as experience at Knepp and elsewhere has demonstrated, farming and conservation need not – should not – be at loggerheads. Giving over areas that are not on prime agricultural lands to nature – ‘land sparing” in the jargon – is farming’s greatest ally. By halting and reversing land degradation, securing water resources and providing insects for crop pollination, rewilding provides services vital to the long-term sustainability of agriculture and food production. The complex mosaic of habitats stimulated by free-roaming grazing animals as we have seen on post-grazing land at Knepp is not only remarkably easy to achieve. Compared with conventional conservation, it is manifestly inexpensive. It also provides much of what we need and what our landscape is currently lacking: biodiversity, resilience against climate change and extreme weather, and natural resources. And it can still produce high-quality food, like pasture-fed meat.

Notice that Tree uses “rewilding” here, but in quite a different context than we do in North America. Rewilders here might be tempted to dismiss Tree’s writing about rewilding, farming, and food production, but I think that would be unfortunate.

Tree recognizes that what she is calling rewilding is necessarily different in scale and in other ways than what is envisioned in North America. She credits the work of Dave Foreman, Reed Noss, and Michael Soulé and recognizes Aldo Leopold as perhaps the first rewilder. She notes that they emphasized ecological networks and the role of apex predators, which may be  unimaginable in Britain, but which is becoming increasingly possible on the European mainland. Experiments in Europe with a more limited rewilding such as Oostvaardersplassen and Kraansvlak in the Netherlands present a “European version” of rewilding, which she describes at length in this book. The effect of this version, she writes, is clear: “the right number of the right species of grazing animals introduced into even a relatively small, isolated area can have an exponential effect on biodiversity. They can provide the initial impetus to kick-start natural processes, like a plane pulling a glider into the air.” Tree and her husband Charlie Burrell have been astonished at what has happened to their family farm and estate as a result of their embrace of rewilding. 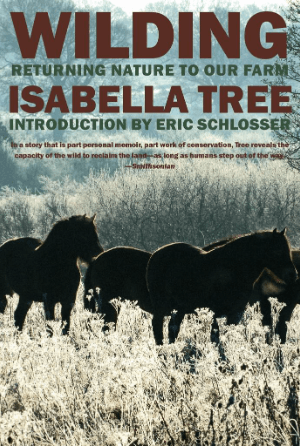 Much of this book tells in considerable detail the story of what has transpired between 2000 and 2018 when they made the decision to abandon conventional farming on their 3500-acre estate, and “surrender” to nature. After considerable interaction with skeptical and sometimes angry neighbors and their team of experts, they decided to call their experiment the Knepp “Wildland” Project and opt for ”wilding” as the operative term for what they were trying to do, leaving out the “re” to reduce speculation among opponents and skeptics that they were intent on returning their part of a landscape that had been domesticated for more than an thousand years to some pre-civilized state. They decided to take the advice offered by ecologist Ken Thompson who counseled in his 2014 book Where Do Camels Belong? that “We should stop thinking that can turn the clock back to some pristine, pre-human golden age, even if we had any idea what that pristine state looked like. We should instead focus on getting the best out of brave new invaded world.”

Knepp Estate history reaches back to the 12th century, its story common to the English countryside with castles and hunts for fallow deer and wild boar, the land passed down through the centuries, in the Burrell family since the 18th century. Tree explains why, in the late 20th century, farming on the “small” scale of the estate was no longer sustainable and their options were to sell out to bigger farms, or do what they did – stop farming, seek to heal the land, and make a living from it in a more sustainable way. She and her husband saw this latter course as an experiment born of economic necessity and ecological awakening. They would rewild the place “giving nature the space and opportunity to express itself,” which they knew was a “leap of faith.” They could not just sell their farm equipment and see what happened but had to proactively decide what they could do to help the process along without doing so much that nature would not be “expressing itself” and they would just be manipulating it in new ways.

Some might see what they did as just such manipulation. They introduced fallow deer, Old English Longhorn cattle, Exmoor ponies, Tamworth sows and piglets, and Red deer to parts of the estate. They drew up “An Holistic Management Plan for a naturalistic grazing project on the Knepp Castle Estate,” removed some fences and erected others. They applied for and received some government subsidies for their experiment. They traveled to other European rewilding experiments and consulted with an impressive team of experts, ornithologists, ecologists, foresters, conservationists ,and scholars studying land management policies in Europe, many of whom they recruited to their advisory board. What they could not do was bring in apex predators in heavily populated Sussex. She explains that even allowing “weeds” to mess up the tidy countryside brought strong objections from their neighbors, so introducing large predators would only be possible far in the future, if ever.

Mostly they tried to restore ecological processes long absent and monitor the results of their efforts with the help of scientists, their students, and fellow conservationists. Tree recounts what happened as the land “healed” and they began to see species long absent or barely present return and flourish at Knepp. In three chapters she describes how the population of the rare purple Emperor butterflies increased and how rare and iconic birds like Nightingales and Turtle Doves increased their presence. A major creeping thistle invasion tempted herbicide intervention in the face of angry neighbors who vehemently argued they should do something before the infestation overflowed into their fields, but they were rescued by a “perfect storm” of Painted Lady butterflies whose larvae took care of the thistles. Tree tells one story after another of unexpected consequences of their experiment and how they dealt with it, mostly by keeping hands-off. An especially good chapter focuses on soil and how, with no more application of fertilizers and pesticides, earthworms returned and the soil began to regenerate.

Tree draws some powerful conclusions from the nearly 20-year continuing experiment. One is that farmers and conservationists must come together. The Knepp example offers many ideas for farmers beset with high fertilizer costs and other inputs that might benefit them economically as well as ecologically from wilding their land. She observes that “the moral case for protecting nature for its own sake, because it is beautiful and important and we have no right to destroy it – has demonstrably failed. When nature is valued at nothing, when it is invisible to the economic system by which we live, the system invariably tosses it aside.” Another insight she has is that focusing conservation on specific targeted outcomes should be replaced by focus on broader ecological processes.

Thinking holistically like this, rebuilding systems with natural processes rather than setting end points, measuring function as much as outcome, could change our whole relationship with the land. While celebrating the advances of the technological age that have brought us more than enough food to feed the world from less land than ever, it could also encourage us to address the failures of ‘masculine’ science – the mindset that holds new technology as the answer to all our problems and any idea of returning to the older technologies of traditional systems, and of yielding to nature, as a backward step.

Tree sounds a keynote here. As many others have said in other ways, we ultimately must change the basis of our conception of ourselves and of nature if we are ever to sustain our communities on the foundation of nature. This conclusion seems to be common sense, and a central tenet of conservation whether we call it “wilding” or “rewilding” or something else. Business-as-usual will not get the job done.

Last year I wrote a review essay titled “Rewilding at Many Scales” about rewilding efforts from the continental scale of Dave Foreman’s Rewilding North America to the local scale of rewilding or, as some would call it, restoring part of a small creek on Washington’s Olympic Peninsula. After reading Wilding I would add “and in Many Contexts” to my growing curiosity about what rewilding is and should be. What may be accomplished by application of Noss and Soulé’s 3 Cs in North America can, if the Knepp experiment is any indicator, be complemented by more limited freeing of nature in places settled, like England, for thousands of years. We must work with what we have in scale and context, and Tree tells of growing amazement at what is transpiring on the piece of the world upon which they are experimenting. Wilding is a thought -provoking and perhaps controversial treatment of rewilding and well worth reading for insights into experiments in Europe that might broaden our conception of what is possible, even in long settled and modified landscapes.