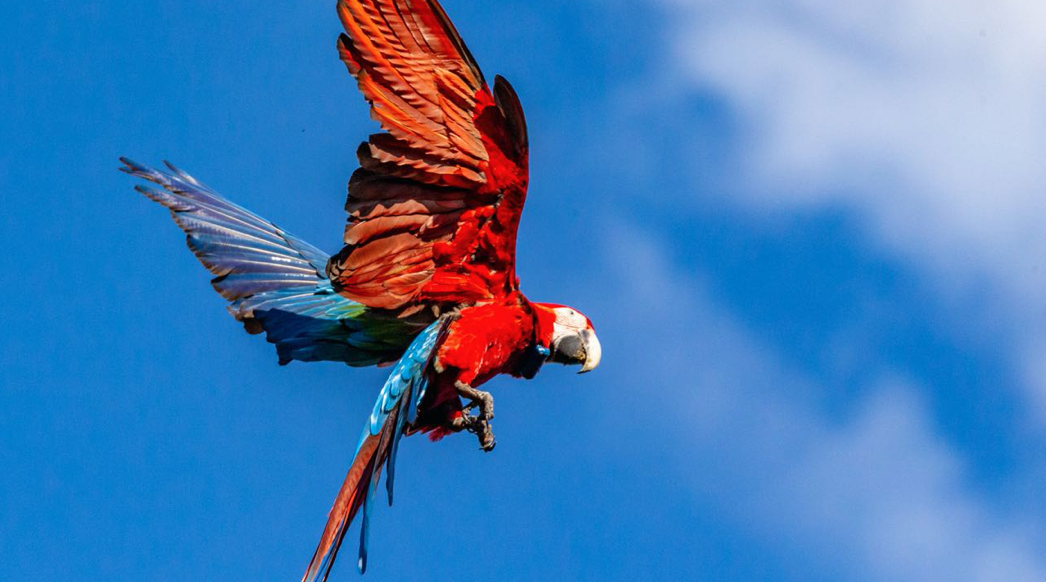 Rewilding Argentina has released five juvenile red-and-green macaws as part of an ongoing project to return this extinct species to Argentina.

June 29, 2020, CORRIENTES — After a century-long absence from Corrientes Province in Northeast Argentina, five juvenile red-and-green macaws were released in Yerbalito, in the protected wetlands of Iberá, as the second population reintroduced by Rewilding Argentina, a strategic partner of Tompkins Conservation. The project seeks to recover the native fauna of Argentina’s largest wetlands and generate a sustainable development model based on the recovery of ecosystems and nature-based tourism. It has been carried out with the Government of the Province of Corrientes, Arcadia Charitable Fund, and Argentina’s National Parks Administration.

Though Iberá Park is teeming with wildlife, the macaws are seen as crucial to saving the dwindling Paraná forest, since as seed dispersers, the species helps to regenerate native forest. Explorers’ records from between 1809 and 1945 indicate the presence of Ara chloropterus in northern Argentina. However, hunting, domestication, religious offerings, and cattle ranching during the eighteenth and nineteenth centuries drove the macaw to extinction.

To date, Rewilding Argentina has reintroduced 15 macaws to Iberá, giving hope that the species will again fulfill its ecological role and help revitalize the forest of Paraná. This group of five were raised in captivity by Ecoparque Buenos Aires and Fundación Temaikén and underwent arduous training with Rewilding Argentina in order to survive in the wild. The training is no small matter. Captive-born macaws must acquire flying skills, learn how to evade predators and adapt to the new diet they will find in the wild. The macaws wear a small radio transmitter that monitors their movements to ensure their adaptation. Since the first release, several breeding pairs have been able to lay eggs, though they have yet to result in new births. Since it’s not uncommon for newly reproductive macaws to face this challenge, this development, though unsuccessful, still represents important progress.

Rewilding Argentina is in the process of bringing back ten native species to the Iberá wetlands, including top predators like the jaguar and giant river otter. The macaws, known for their charisma and vibrant colors, are a key attraction for nature-based tourism, which is part of a new sustainable economic model for the development of local communities.

“In the context of the climate crisis and the ecological crisis, tourism based on the conservation of ecosystems is being positioned as a new production model capable of sustaining itself over time,” says Marisi López, coordinator of the Iberá Project. “In Corrientes, we have had the courage to try it, and it works.”